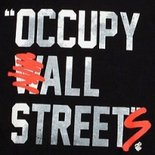 Focusing on civic contexts, the subproject by Anne Kaun explores contemporary protest movements and their narratives of Europe that appeared in the aftermath of the financial crisis across Europe more specifically in Sweden and Latvia.

During the last years several new forms of subterranean politics (Kaldor et al. 2012) have appeared worldwide in reaction to the current crisis and the consequent austerity measures. The Occupy movement, for example, firstly emerged in New York City and quickly spread all over the world. This subproject examines protest movement narratives appearing in the context of three crises: the Great Depression in 1929, the energy crisis in 1972/3 and the financial crisis in 2007/8. Ultimately the project brings crisis and critique together using media practices as an empirical starting point to study narratives of Europe applying a historical perspective.